Please be aware that this page contains spoilers. Turn back if you do not want to be spoiled.

She is no longer an Inspector within Division 1 of the Criminal Investigation Department of the Public Safety Bureau following her arrest for an incident in which she stands accused of endangering the public's safety and for which she now awaits  judgment.

Her office uniform consists of a white blouse, dark gray blazer and thigh-length skirt. Her field uniform usually consists of a police jacket over her work attire with WPC and 103 emblazoned on each arm.[1] In 2114, Tsunemori is seen in a new office uniform consisting of a structured white top, dark blazer and dress pants. She still wears her police jacket over her work attire.[2] She often wears the same blazer and skirt, but with a yellow blouse. In 2120, while in custody, she is seen wearing a brown turtleneck, tan tunic, orange bolero and brown pants.

In the gekijo-ban, her work attire includes a pink blouse and pearls. While in the field In Shambala Float, she wears military-style cargo pants, a PSB white tee, a bullet-proof vest and gripper gloves.

Her fashion style is "girlish casual, which isn't too sweet," and a small bit of make up. Her casual clothes include a black woolen coat, a pink track suit and a yellow nightgown. She likes to wear various holo clothing over her suit.

Tsunemori appears to be shy and naïve at the time of her recruitment, as well as quite idealistic. She agonizes over the purpose of her existence, which is an uncommon trait when compared to the other characters. As time goes on, however, Tsunemori reveals herself to be intelligent, insightful. patient and compassionate as an Inspector. Despite being generally polite and respectful, she can be headstrong, growing angry or upset with others for doing things with which she disagrees philosophically.[3] She is shown to be humble, as seen when she tells Kunizuka she is being overly considerate when the Enforcer says she would put her life in her hands.[4]

After spending time with the members of Division One, Tsunemori develops into a full-fledged detective, albeit tempered by her personal sense of justice. An example of this is when she is unable to kill Shogo Makishima not once, but twice: the first time leading to the death of a friend and the second time preventing her from avenging said murder. Yet, she still tries to bring him in alive instead of exacting revenge.

Tsunemori develops a more detached approach to investigation, as shown when she calmly uses her negotiation skills to talk down a criminal using bombs to attack the PSB, pushing his Psycho-Pass under 100, thus allowing her to stun him in order bring him in instead of decomposing him.[5] However, when said bomber commits another crime and murders over a dozen people, she outright tells him that any sympathetic words she might tell him are now meaningless, and she is prepared to give the execution order when Inspector Aoyanagi takes him down.

After having the true form of the Sibyl System revealed to her, Tsunemori is shown to be hateful towards it but agrees to maintain it, knowing that the current society cannot live peacefully without it. She tolerates its existence because she believes the system will be terminated in the future. She is, on the other hand, capable of contradicting Sibyl at times, as seen when she attempts to bring in Kirito Kamui alive despite the system wanting him dead, so she can learn why he's considered a societal threat.

Despite everything she has experienced, Tsunemori maintains a healthy Psycho-Pass and is quick to recover from any traumatic event, such as the aforementioned death of her friend and the death of her grandmother. While others view it as the result of a strong ego and the Sibyl System deems her a "unique individual," Tsunemori believes that it means she's cold-hearted and unfeeling, and she is disturbed with how quickly she gets over these events.

Akane was born in Chiba to Shoichi Tsunemori and his wife. At school, Tsunemori is one of the top students with several notable achievements, both in the public and private sectors.[6] She used to be good at all science-related subjects.

It is implied that both her parents are still alive and it is known that Akane maintained a close relationship with her grandmother.

Tsunemori was the top student in the training school. In Sibyl's estimation, her aptitude was the only one to exceed the Bureau's employment standards. She achieved an A ranking for 13 different ministries and agencies, along with six different companies.[6]

As an experienced former detective assigned to Division 1 with Tsunemori, Kogami is curious about her attitude towards latent criminals and her willingness to treat them as human beings rather than "hounds." She is curious about him as well, finding his methods of detective work surprisingly effective. Kogami respects her work ethic and attitude saying, "This girl is amazing. She's a female who deeply loves law and order and is also deeply loved by it. Her expression is just like a prayer to the heavens."[8]

Following the failed murder of Chief Joshu Kasei[9], Kogami escapes from the CID with Masaoka's and Saiga's help. Because Makishima is a precious research specimen, Tsunemori is willing to bring him in alive in exchange for Kogami's unfettered flight.[10] She abets Kogami's escape to Southeast Asia and soon thereafter, he places an untraceable call to Tsunemori to prepare her for his possible death.[11]

After Kogami's escape, when confronted with problems she can't solve on her own, Tsunemori often lights a cigarette known to be Kogami's favorite brand in order for the scent to infuse her clothing in order to invoke his presence in her mind and hear what words of wisdom he might impart if he were present.[12][13]

When Ginoza first meets Tsunemori, he assigns Kogami and Masaoka, the two Enforcers he trusts best to work as a team to assist Tsunemori on her first mission.[1] At first, the senior Inspector and Tsunemori appear to merely tolerate one another. Over time, Tsunemori learns that Ginoza's abruptness stems from his fear of seeing yet another Inspector/friend/family member demoted to Enforcer status. This explains his keen interest in Tsunemori's state of mind and stable emotions.[14] As Tsunemori develops as an Inspector, Ginoza begins to trust her and earns her trust, in return.

After Ginoza is demoted to Enforcer,[2] the two form a firm partnership based on mutual trust and understanding. Ginoza is greatly concerned for her safety and mental stability, reminding her of the dangers of falling into the "abyss" [15] and serving in a supporting role as one of her Enforcers. By 2116, Ginoza is a staunch ally of Tsunemori while adding his own views on cases and even chastising other Inspectors who speak ill of her. He persuades her to keep a balanced outlook regarding Shinya Kogami, whom he has come to distrust despite their past friendship.

Masaoka serves as a mentor and father-like figure to Tsunemori, as seen when he consoles her after her best friend is murdered by Makishima. Additionally, Masaoka serves as the link between his son Ginoza and Tsunemori before his death.

Kagari thinks Tsunemori is cute the first time they meet and wants to be assigned to her team.[1] His interest is shown to be somewhat romantic in nature.[8][16] Kagari isn't much older than Tsunemori and they develop an interesting friendship wherein Kagari's low key style helps Tsunemori relax a bit. He also shares with her his cooking skills[17] and various hobbies. When Kagari's death is confirmed by Sibyl, Tsunemori is both angry and sad about it.[10]

As Togane wants to paint Tsunemori "black," he manages to gain Tsunemori's trust by mimicking Kogami's behaviors and agreeing with her from time to time. Thus, Tsunemori is duped and begins to rely on him as she did Kogami, never doubting his motives and unaware of his secret schemes.

Tsunemori and Funahara have been best friends since middle school, their first conversation revolving around Tsunemori's mushroom-like haircut.[8] However, while Funahara likes Tsunemori very much, she is also a bit envious of Tsunemori's abilities and evaluation scores.[6]

At first, Tsunemori appreciates Saiga when Kogami takes her to meet him.[18] When Saiga becomes a latent criminal, Tsunemori manages to get him to help her investigations and because Kogami trusted him, Tsunemori believes that he is the only one she can depend on, as well, during that unusual time.

Tsunemori, looking at the director of the factory (0103 Rearing Conventions).

Kogami, comforting Tsunemori, because she is blaming herself for the death of her classmate, Sugawara (0105 Nobody Knows Your Face). 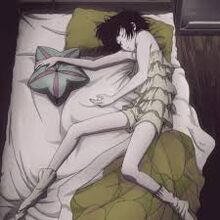 Tsunemori, trying to kill Makishima (0116 The Gates of Judgment).

Tsunemori, when the Sibyl System reveals itself to her (0120 The Place Where Justice is Found).

Tsunemori, aiming at Kamui (0206 Those Who Cast Stones).

Tsunemori is pointing her weapon to the last terrorist. (Gekijo-ban: Psycho-Pass).

Tsunemori has a talk with Kogami, while watching the rebels praying (Gekijo-ban: Psycho-Pass).
Add a photo to this gallery

Retrieved from "https://psychopass.fandom.com/wiki/Akane_Tsunemori?oldid=23538"
Community content is available under CC-BY-SA unless otherwise noted.