Akira Karasuma is a Diet member of the House of Representatives in the Eugenics Party and a central figure in the creation of the Special Ward Sanctuary belonging to the Ministry of Economy, Trade and Industry's Environment Bureau.

Karasuma is a male of average height and build in his 30's. He has dark-irised eyes snd short black hair swept to the left. He is typically seen in a dark blue suit, white dress shirt and red tie.

He is described as a young and talented politician. He is aware of illegal crimes committed at Sanctuary, but chooses to cover it up for the greater good of society.

In February 2117, he arranges for the murder of Ataru Takeda when he discovers that Takeda has discovered the corruption within Sanctuary.

The Sibyl System occasionally inhabits Akira Karasuma's android body in order to operate in real-time under the guise of a fully functioning human being.

Shimotsuki is the only person in the Public Safety Bureau who is aware of Karasuma's true identity, as well as the extraction of high-level radioactive waste being the source of crime committed at Sanctuary. Though conflicted about her blind faith in the system after this revelation, Shimotsuki agrees to keep the truth secret in exchange for Izumi Yasaka and Takeya Kukuri's safety. 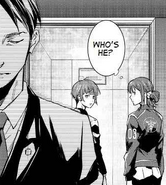 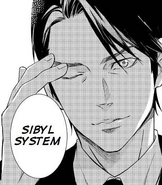