Akira Kitazawa is a criminal who wants to take revenge on society utilizing his bomb-making skills. He gets help from Kirito Kamui with his Psycho-Pass status. He is taken into custody after Akane Tsunemori manages to reduce his crime coefficient to 299 and she is able to stun him instead of kill him. He manages to later escape, but is found and killed by Risa Aoyanagi with her Dominator.

Kitazawa is a male of average height and weight who is in his 20's. He has dark-irised eyes and short brown hair that is held back from his face by a black hair band. He is typically seen wearing an olive green shirt and pants or an isolation facility inmate uniform. He wears a tan fur-collared jacket when outdoors.

Not much is known about this element; however, it may be speculated that Kitazawa is an amoral, anxious person based on his crimes and willingness to work with Kamui in having his Psycho-Pass cleared.

He is an excellent student in school, but is later diagnosed with a deteriorating Psycho-Pass. Due to his desperation about it, he decides to take revenge on society. 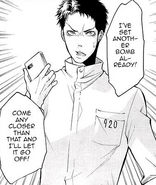