Akira Yamatoya is an Enforcer within Division 02 of the Criminal Investigation Department of the Public Safety Bureau.

Yamatoya is a male of average height and build in his 20's. He has eyes that always look closed and short brown hair. He is typically seen wearing a black jacket over a white dress shirt, dark blue tie and black pants.

He appears to be an obedient and composed Enforcer, but his Psycho-Pass tends to grow worse in dangerous situations.[1]

Yamatoya is an Enforcer from Shisui's division. They had a professional relationship, but when they met Kamui, Shisui was manipulated into killing Yamatoya.[1] After some time, she feels no remorse about it and thinks it was the right thing to do.[2]. 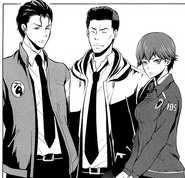 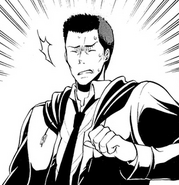