Asahi "Rick" Fellows is an employee of the Hyper Transport Company who is murdered to prevent him from acting as a whistleblower on two of the company's corrupt administrators.  He is killed when he is sucked out of a cargo bay of a transport plane as the doors inexplicably open mid-flight. The transport's subsequent crash is a part of the first investigation in which Arata Shindo and Kei Mikhail Ignatov are involved as their first case with the Criminal Investigation Department of the Public Safety Bureau.

Fellows is a Russian male of average height and build in his 30's. He has brown eyes and messy blond hair parted in the center . He is typically seen wearing a white shirt, black pants and suspenders.

He is a highly analytical individual who loves solving mathematical formulae and making holographic flowers. Sho Hinakawa calls him a genius because he figures out how Takumi Yonehara and Tetsuya Sasagawa are manipulating the economy through disreputable lending practices before anyone else is aware of it. Rick also possesses a strong sense of ethics and morality as he is willing to risk his life in order to bring the wrongdoing of Yonehara and Sasagawa to light.

Kaori is Rick's wife. They meet at a Russian evacuation site following the Russian civil war and fall in love. They later marry and emigrate to Japan to find a more peaceful life. 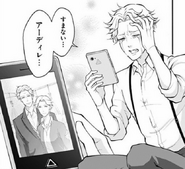