Audio Dramas are official, special offerings for fans. Most are humorous. They are mainly from CID 24 Hours a Day. The dramas are also re-packaged into other media formats.

CID 24 Hours A Day (Kanji: 公安局刑事課24時) may be found on the web as well as an official iOS app. Several CDs have already been marketed. The humorous segments are diversionary in nature and irrelevant to the anime storyline. However, the serious audio dramas employ official settings. The main character is Nobuchika Ginoza (voiced by Kenji Nojima), who is always being kidded by his old friend, Shinya Kogami (voiced by Tomokazu Seki) and others. The two voice actors often perform sound effects, such as Ginoza's dog, Dime. In the lightweight stories, the detectives enjoy a happy work shift, as opposed to the anime series. The voice actors also chat about the characters and the story.

The audio drama contains episodes 0-13 and episode revival 1-3. Revival 3 is the last audio drama at the moment.

Each CD of an audio drama also contains a special track (an additional audio drama), as the covers show. 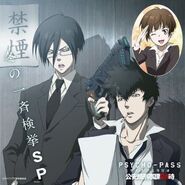 CD contains episode 0-4, and a special 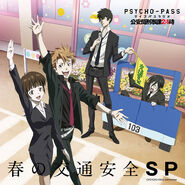 CD contains episode 5-9, and a special 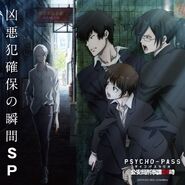 CD contains episode 10-13, and a special 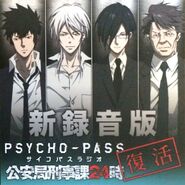 CD contains episode revival 1 and revival 2, and a special 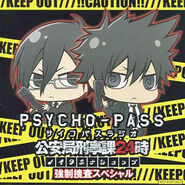 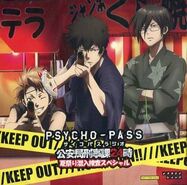 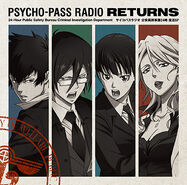 CD contains revival 3, and a special
Add a photo to this gallery

This series of audio dramas is served as a introduction of Psycho-Pass: Mandatory Happiness.

In BD Box Vol.8 (2012 original edition), the special audio drama shows some after stories of Division 1. Akane Tsunemori has dialogue with Ginoza, Yayoi Kunizuka and Shion Karanomori. She also has some nightmares and delusions. The fifth part shows Kogami calling to her to say that he might die during his escape.

Each BD box has an audio drama of particular character.

The audio drama Gekijo-ban: Psycho-Pass -ALL STAR REAL ACT- is included as a special.

Retrieved from "https://psychopass.fandom.com/wiki/Audio_Dramas?oldid=16094"
Community content is available under CC-BY-SA unless otherwise noted.