Bazarov Triskov is an immigrant worker who attracts the attention of the Criminal Investigation Department during the Hyper Transport Case.

Triskov is a male of average height and a stocky build in his 40's. He has blue eyes, neatly-kept brown hair and matching boxed beard. He is typically seen in civilian clothing.

Although he is investigated by the Criminal Investigation Department for potential extortion, he is let off with only a warning from Arata Shindo. Triskov appears to be genuinely chastened and eager to become a good citizen.

Triskov deeply loves his family and is willing to do anything for them, to the point of committing a crime, if required. 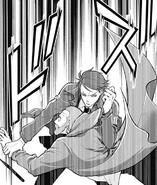