The Bifrost System also known as Joint Automatic Debugging Diagnostic Repair Subsystem (Japanese: 併設型自動デバッグ診断修復サブシステム Romaji:Heisetsu-gata jidō debaggu shindan shūfuku sabushisutemu) is an AI created as a vital part of the Sibyl System in its early stages to assist in evolving the multi-brain intelligence by confronting it with challenges. This unique super-computer is separated from the organic sector and hidden away to prevent tampering. However, manipulation of its intelligence by the Bifrost crime organization occurs in Season 3.

In Norse Mythology, "Bifrost" is the name of a mythical burning rainbow bridge that links the world of Midgard (human world) to Asgard (realm of the gods). It is guarded by Heimdall, the all-seeing. During Ragnarok, Heimdall will blow his horn, Gjallarhorn, to warn the other gods that the giants will breach his defenses and cross the bridge to storm Asgard and slay the gods. Another interpretation is that the rainbow bridge actually refers to an Aurora. (source:Wikipedia)

Bifrost's location is housed in a cavernous space made of unknown material that cannot be penetrated, either by Sibyl's most sensitive equipment or its intuitive minds. It is buried far deeper beneath the NONA Tower than even Sibyl's core surrounded by what appear to be protective devices and massive super-computers that comprise its overall make-up.

The Bifrost System appearing as a holo.

The origin of the Sibyl System logo.

The Bifrost System being dismissed by the Sibyl System. 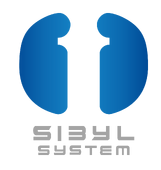 The Sibyl System logo pointing to the truth all along.