The Criminal Investigation Department (CID) (Japanese: 刑事課所属) is the department within the Public Safety Bureau tasked with managing crime. Its members work under three different groups: inspection officers, enforcement officers, and analysis officers. Due to the high efficiency of the various drones and the automatic driving system for cars, the Traffic Department has few officers.[1]

A Psycho-Pass is the actual psychological certification given to a person based on the various measurements of his or her psychology and personality to provide a grade on their mental stability and to measure a person's criminality potential. If the measurement exceeds a certain amount (100 points), the person is branded as a latent criminal and removed from general society in order to protect the populace, even if no actual crime is committed.

However, those with high criminality demonstrating that they have a strong likelihood to be a detective are given an offer to be released in exchange for their services as enforcement officers. Their high criminality makes them best suited to the task of understanding the criminal mind and to analyze crime scenes while solving criminal cases with a high degree of efficacy. They also provide protection for the Inspectors, who use the Enforcers in their place in dangerous situations in order to protect their Psycho-Passes from becoming clouded.[2]

Because of the serious threat they pose as potential, Inspectors are given authority over them to monitor their field activities. If an Enforcer tries to escape, it is the Inspector's duty to administer enforcement action as Sibyl sees fit through the Dominator. There are also cases in which an Inspector is demoted from his/her rank, as seen with Shinya Kogami; his Psycho-Pass skyrocketed after Mitsuru Sasayama's death and he was immediately demoted to Enforcer status. Nobuchika Ginoza and Kaname Shinjo also met this fate.

Hues are a visual representation of a Psycho-Pass, showing when a subject is happy, sad, angry, depressed, in relation to time. The CID relies on street scanners that scan an individual's Psycho-Pass, complete with their hue assessment and Crime Coefficient, as well as a graph providing the history of those values. They can also use their Dominators, which calculate such values instantly. When a Hue is processed, it comes in a variety of colors. Someone whose Hue is in top condition will have light colors such as pink, powder blue, or light purple, while someone with a bad Hue will appear in darker colors such as yellow-green, steel blue, or forest green until it eventually gets clouded beyond recognition and turns black. Criminally asymptomatic people, however, will always have a Hue of pure white.[3]

The PSB uses special holo-devices called Wristlinks with multiple functions: phone calling and receiving, projecting a hologram keyboard, sending information and mail, connecting to the department's system, controlling drones, dealing with fundamental analysis on case evidence, storing information, etc. The wristlinks for Enforcers are more difficult to take off to prevent them from running away.[4]

Division 01, Division 02, and Division 03 make up the entirety of the Crime Investigation Department. Each division is comprised of the following types of personnel:

The Inspectors are the intelligence agents of the Bureau who watch over the Enforcers. They are among society's elite with stable personalities and low Crime Coefficients. They must be intelligent, calm, and high in academics. Candidates fitting all of these requirements are invited to join the criminal task force in this division. It's a stressful job because it requires them to constantly watch over the Enforcers, but it can also be rewarding because of the career advances it offers. They are given more privileges and literally "own" the Enforcers, with the ability to punish them for disobeying orders. They wear a signature blue jacket that marks them as Inspectors.

The Enforcers are the main powerhouse for the Bureau. All of the Enforcers have high Crime Coefficients and are only brought back into society for the sole purpose of exposing and eliminating criminals just like themselves. They cannot do anything without their respective Inspector's approval and face serious consequences for disobeying direct orders. Ginoza describes them as beasts that are used to hunt beasts, saying that they are not human but more like hunting dogs, tracking down the criminals and doing most of the grunt work at hand.

These individuals are in charge of support-related tasks for all divisions, insofar as is known. They measure and process the Crime Coefficients of criminals and do data analysis work. They wear white lab coats. 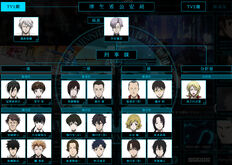 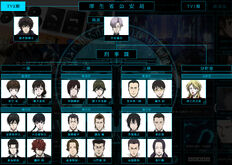 Structure of the CID as of October 2114. 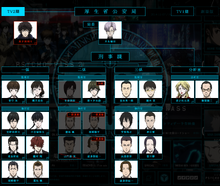 Structure of the CID as of November 2114. 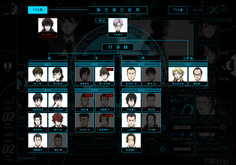