Harris Sho Flannagan is the comatose male being taken care of by Theresa Shinogi.

Flannagan is an adolescent male of indeterminate height and weight. He has eyes of an unknown color due to their being closed and cropped light brown hair. He is typically seen asleep with an oxygen mask over his nose and mouth, except when Arata Shindo takes on his visage.

Before his induction into Heaven's Leap, Flannagan wanted to help refugees.
He joins Heaven's Leap and undergoes the Eternal White treatment.

Flannagan is O'Brien's son. He deeply cares about his son and is willing to do anything for him.

Flannagan knows Shinogi as his father's old friend. He has been placed in her care ever since he was a child following the death of his biological mother.

Photo of Harris and his father (Episode 6)

Kurisu sees reflection of his son on Arata's face (Episode 7). 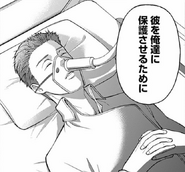