Haruki Enomiya is an ex-Pro Athlete and latent criminal who owns an HvH (Human versus Human) underground combat ring. He acts as a broker in an abandoned zone of the city and also serves as a Bifrost Inspector.

Enomiya is a male of average height and unknown build in his 40's. He has red-irised eyes and long, dark gray hair partially done up in braids. His skin is pallid due to extensive surgeries. He is typically seen in a red fur coat over a white three-piece suit, black tuxedo shirt and red evening bow tie. He wears black lipstick and several rings.

He has a cunning, dominating personality. He is cruel and unfraid to force his workers into performing humiliating acts just to prove his power over them.

Enomiya has a history with Irie as his one-time employer. Their ties are severed when Irie becomes a CID Enforcer. During the investigation of Lee Aki's murder, Irie leads detectives from his division to Enomiya's hideout, where these two meet again. Enomiya isn't happy with Irie being the "hunt dog" now, because he was his brightest man.

Oishi is one of Enomiya's bodyguards. He is loyal to him and will obey any order given, even if he was supposed to be humiliated, what was seen when he eats the pipe that Enomiya put out on his tongue earlier. Haruki thinks that Oishi and other people in his staff are trained like "circus animals".

Azusawa also arranges an elevator accident, where Haruki escapes after their fight together. After a while, Haruki realized that he the elevator is broken, but he has no time to escape and dies. Koichi jokes that if Haruki chose the stairs, he would be safe and adds poetically that he was never beautiful or nice. 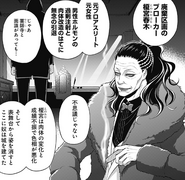