In the world of Psycho-Pass, holograms are an essential part of daily life. They are used in both personal and professional areas, can be summoned up or dismissed easily, and serve a variety of functions.

In the area of personal utilization, 22nd century citizens typically live in what is called a holo house, a virtual structure that overlays a basic substructure. It is the rule, rather than the exception. It is different than a brick-and-mortar home, such as the one in which Joji Saiga lives before becoming a latent criminal. A holo servant is an automated program that performs the duties of a butler or maid. Akane Tsunemori has a holo servant in the shape of an interactive talking jellyfish named Candy.

The futuristic city of Tokyo is littered with holographic projections and displays. In the entertainment district, these images are primarily used for advertisements and signage. In some cases, exterior holos are also used on buildings to make them appear well-kept and inoffensive to others.[1] The Public Safety Bureau utilizes the technology to create representations of barriers similar to 21st century "Do Not Cross" tape in order to isolate a crime scene.

Holos are also used for recreational pursuits, like cinema. Cinema produced via VR technology is highly regulated, making the less regulated Hologram Cineplex a popular venue. The audience stands around in an enclosed room while a large-scale holo is projected onto the space, allowing the viewer to feel they are witnessing the events unfolding around them.

Because it is immersive, Sibyl only recommends films which aren't stressful. Though not imposing restrictions, producers are responsible for censorship. Sybil rarely recommends violent action films, and there are even less philosophical and historical genre films. The emotional tension in romance movies is also limited to prevent changes in Hue. Action movies are often filmed overseas and imported, despite a national policy of isolationism. Most films developed and distributed in Japan feature plots involving expatriates being assaulted by overbearing foreigners. Some action movies suggest they are based on Criminal Investigation Department detectives, but they fail to reflect the reality of the job and people tend to avoid such films for fear their Hues will be affected.

The Public Safety Bureau employs holos on a routine basis as they investigate cases. Unlike a Psycho-Pass reading or Crime Coefficient, holos are seen when wristlinks are in use, casting an image in space large enough through which the officer can communicate with the NONA Tower or MWPSB HQ to transmit and receive critical data. The Dominator's usage history also appears on these devices.[2] Wristlinks also serve as interpersonal communication devices.

Komissa are chibi-like figures that can move about and communicate with people. They are sometimes used by Inspectors disguise themselves in order to question citizens or to secretly approach a criminal. Unmanned Komissa are also deployed to organize crowds and redirect the citizenry when required.

In the CommuFields, avatars are used by all participants to ensure anonymity. Each person projects a unique character that they use to socialize with other users and to travel to other CommuFields. Such characters include Talisman, Spooky Boogie, Melancholia, and Tsunemori's own Lemonade Candy. While it is required to wear gear in order to enter the CommuField, one can also use holo to project the image of their character over themselves. This is used when a get-together between avatars takes place outside of the virtual world, usually in a club.[3]

Kirito Kamui uses aged holos of the children who were killed in the Mount Kumataka plane crash to disguise himself during the various incidents that transpire in 2114. These aged holos include Riku Mukojima, Maki Shimizu, Kyohei Otsu, and Satsuki Ogina. Kamui himself is a holo, which hides his true grotesque appearance.[4]

Through the use of holo, one can easily change their clothes by having an overlay of another outfit over their actual clothes. Tsunemori uses this to change her clothes instantly by using her compact, which offers a wide selection of outfits.[5][6] They can also be purchased if desired.

In addition to clothing, a holo can be used to change the appearance of an automobile. The PSB uses this to change their ordinary vehicle into a police cruiser when the situation calls for it.[7][8]

Candy wakes Tsunemori up (0102 Those Capable).

Tsunemori "puts on" her work clothes (0102 Those Capable).

A hologram masking a civilian automobile with police markings. 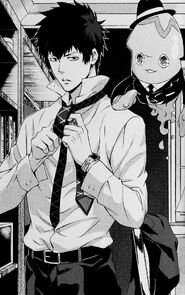 A holo companion similar to Candy seen in the manga, Inspector Shinya Kogami.