Ichido Todoroki is the son of Haruma Todoroki and the younger brother of Tenma Todoroki. He also serves as one of Kosuke "Herakles" Yakushiji's gubernatorial election campaign advisors.

Todorokiis a male of average height and build who appears to be in his 30's. he has dark-irised eyes and short black hair that tapers around his forehead. He is typically seen wearing a dark gray suit, black vest, white dress shirt and maroon tie with gold clip. He is always seen wearing a stern expression.

He is a cold, judgmental individual who firmly believes that one's crime coefficient can be inherited via blood. Ichido's bloodline is inherited from a mother whose Hue was clear while Tenma's mother had a clouded Hue.

In November 2120, Todoroki is hired to be an advisor for Yakushiji's campaign party.

Haruma is Ichido's father. As the younger, favored son, they share a good relationship.

Tenma is Ichido's older brother. He is disowned when it is discovered that he is a latent criminal. Ichido calls him the "shame of the Todoroki family." 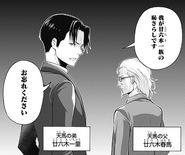