Ito is a male of average height and build in his 30's. In his ID picture, he has dark-irised eyes, short brown hair and is wearing a blue suit, white dress shirt and green tie. Beneath the helmet, his eyes are fully white and he wears a long, high collared red coat and black pants.

He is furious with Hiroko Fuji, perhaps even obsessed, when she breaks off their romantic relationship. He manifests his anger by cutting in half the many photos he has of her in his apartment. He does so by turning them into effigies into which he plunges scissors. His rage increases until he murders her.[1]

Fuji and Ito are lovers until she abandons him after the Sibyl System proclaims there are other people more suitable for her. She seems to take pleasure in Ito's unhappiness with the decision and is murdered by him.[2] 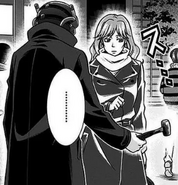 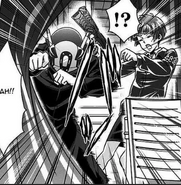