Koichi Ashikaga is a latent criminal who is in a Rehabilitation Center.

Ashikaga is a male of average height and build but of indeterminate age due to his strange appearance. He has blue eyes and is bald. Most of his body is covered with a human skeleton tattoo.

He is an art connoissseur and uninterested in anything not related to "real art." He appreciates the artwork of Roichi Oryo[1].

In the past, he ran an art shop, but is currently in a Rehabilitation Center as a latent criminals with a crime coefficient of over 300. 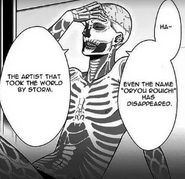 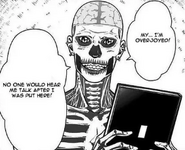 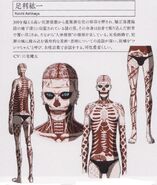