Koichi Hatano is an Enforcer within the Criminal Investigation Department of the Public Safety Bureau's Division 03 who transfers from Division 02.

Hatano is a male of average height and fit build in his 30's. He has dark-irised eyes and brown hair centrally parted and pulled back into a ponytail. He is usually seen wearing a black suit, white shirt, and either a black or red tie. He wears a black coat on missions.

Hatano is always smiling, which may prove his cheerful personality. He willingly obeys Inspector Risa Aoyanagi's orders, as seen when he agrees to trade divisions with Shinya Kogami without protesting[1]. 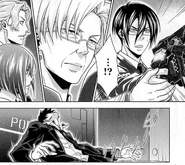 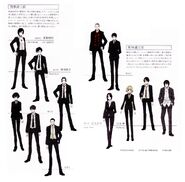