Kuwashima is a male of average height and weight in his 30's. He has dark-irised eyes, short black hair that is partially combed and a sparse goatee and moustache. He is typically seen wearing a black suit, blue dress shirt and striped tie.

He is a troubled individual who struggles with being a "survivor" when so many others died in the plane crash on Mount Kumataka. His guilt plays itself out in taking revenge on the Sibyl System.

Kuwashima attends the same school as the children who perish in a plane crash, but transfers shortly before the trip takes place and escaping death, feels guilt.[1]

Kuwashima and Kamui used to be friends before Kuwashima transferred the week before the plane crash. Thus, he avoided death, but survived the loss of friends. When he unites with Kamui, who has returned in a body composed of all 184 children who died, he decides that Sibyl has been unfair and so unites with Kamui to help him destroy it. Kuwashima tells him that he believes that he is able to change the world, to which Kamui replies that he has always been his dear friend.[1] 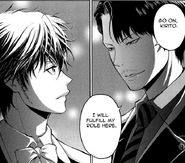 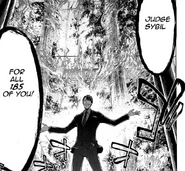 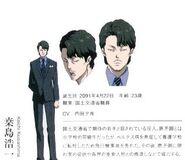