Kujo Tsuchiya is a former college professor of neuroscience who becomes a member of Karina Komiya's psychological care staff.

Tsuchiya is a male of average height and a slender build in his 50's. He has dark-irised eyes, prematurely gray hair and matching boxed beard. He is typically seen wearing a gray suit, white dress shirt and a dark tie. He wears round, wire-frame corrective lenses.

Tsuchiya is observed to be unstable and frightened in his actions. He is a lonely but caring individual who abhors violence following the murder of his daughter. He possesses a keen, analytical mind that he puts to use in developing Ma-Karina, a holographic version of Komiya.

Initially, Komiya trusts him, hiring him as the head of her psychological care team, but later comes to believe he is nothing but a stalker. Because of his contribution to her campaign and his technical prowess, she sequesters him in a fine hotel instead of a hospital for his psychological care, under surveillance at all times.

Ma-Karina is a new generation A.I. created in Komiya's image by Tsuchiya to help Komiya win the gubernatorial election. He dotes on the A.I. as a surrogate daughter in an attempt to assuage his grief over his daughter's death. However, he grows obsessed with her out of a desire to protect her and starts stalking Komiya in an attempt to get her back. 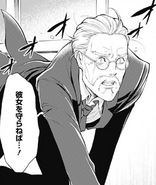