Koki Mima in a misguided individual who is convinced by Kirito Kamui to kill people in a medical center with the intention of setting them free.

Mima is a male of average height and build who appears to be in his 70's. He has dark-irised eyes, short gray hair and wears corrective lenses. He is typically seen wearing a brown jacket, blue open-collared shirt and light colored pants. In the episode, his cheek and jacket are stained with blood. 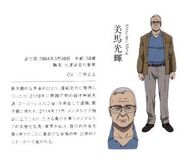