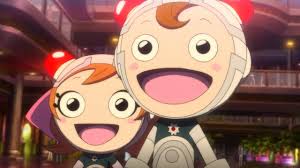 Komissa-chan (コミッサちゃん) is the mascot of the CID. The boy is called Taro (太郎) and the girl is called Hanako (花子). They are both voiced by Natsumi Takamori in Japanese and Jād Saxton in English. "-chan" (ちゃん) is an honorific used for endearing people such as babies, young children, grandparents and teenagers. It may also be used towards cute animals, lovers, close friends, any youthful woman, or between friends.

The mascots are designed to relieve the tension of the masses by having non-threatening, childlike appearances. Their sweet features are used in drones to reduce the stress of individuals during their checks or guidance. It also has another tactic usage: detectives use the holographic projection of Komissa to question people or to secretly approach a criminal by disguising themselves as a drone. Also, Komissa is frequently deployed to act as roadblocks, restricting access to a crime scene. 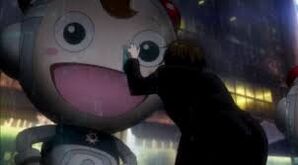 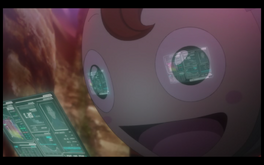 Masaoka in the projection of Komissa reading Yamane's Crime Coefficient (in 0102 Those Capable).
Add a photo to this gallery

Retrieved from "https://psychopass.fandom.com/wiki/Komissa?oldid=16087"
Community content is available under CC-BY-SA unless otherwise noted.