Kozaburo Toma (藤間 幸三郎 Touma Kouzaburou) is a criminally asymptomatic individual and the criminal force behind the Specimen Case. He is eventually deemed a member of the Sibyl System by Joshu Kasei.

Toma is a male of average height and build in his 30's. He has brown eyes, short brown hair and a beauty mark just below his left eye. As an instructor at Oso Academy, he is typically seen wearing a white dress shirt, black vest, dark pants and a red tie. 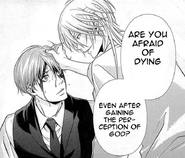 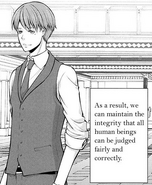 Volume of Psycho-Pass/Zero: The Monster With No Name