Kyohei Otsu (大津 享平 Ootsu Kyouhei) is one of the children who perished in the Mount Kumataka plane crash. He is now one of the seven personalities of Kirito Kamui. He appears as a staff member of a medical facility.

Otsu is a male of average height and build. He has gray eyes and black hair styled into a bowl cut with shaggy bangs. He is typically seen wearing a standard pharmacist's uniform.

He has been described as a "group representative who feels grief."[1]

Otsu was one of the children who died in a plane crash fifteen years ago. Then, on behalf of the Togane Foundation, his brain was connected to Kirito Kamui, who took over his personality and used Otsu as one of the holograms, wanting to restore his hue.[2]

Kirito, using the Otsu hologram, works as a pharmacist.

Prior to the accident, Otsu and Kamui are classmates. Due to the surgery, Otsu now lives on through Kamui. 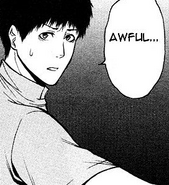 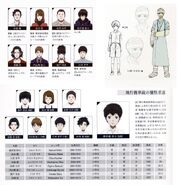 Otsu with his friends (The Official Profiling Book 2)