Aki is a male of average height and build who appears to be in his 30's. He has brown eyes and short brown hair swept to the left. He is typically seen wearing a dark gray suit, white dress shirt and lime green tie.

He is professional, both in his demeanor and attitude. As a former pro-athlete, he believes in the power of sport to help individuals improve their lives.

Prior to the 2120 gubernatorial election, he was a professional athlete. It is unknown when he first began working for Yakushiji.

Yakushiji took Aki onto his staff as a routine part of his philosophy that former athletes are people of good character. As a result of this opportunity and Yakushiji's kindness shown to others in a similar position, Aki believes in Yakushiji wholeheartedly and in his ability to win the election.

Aki's photo in the news (Episode 3) 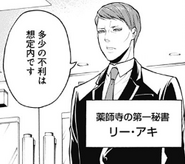