Masatake Mido (御堂 将剛 Midou Masatake) is an avatar-obsessed individual who murders people he finds unworthy of their avatar and/or their avatar's popularity. After killing them, he adopts their avatar as his own and pretends to be the now-deceased person. His latest thieved avatar is known as Talisman.

Mido is a male of average height and build in his 20's. He has dark-irised eyes and black hair styled into a bowl cut with irregular bangs. He is typically seen wearing circular corrective lenses and a dark gray Mandarin-collared jacket. His facial expression is non-existent.

Despite a lack of expression, he has a passion for avatars, worshiping them with utmost loyalty. Shogo Makishima finds him interesting because Mido "could become anyone," though this seems to be only because Mido is "no one" and could pretend to be anyone else - flawlessly. In addition to exhibiting cruelty towards the avatar owners he kills, he generally lacks empathy for others and only begins to show fear just before he's killed by the Dominator's Lethal Elimination setting.[1] 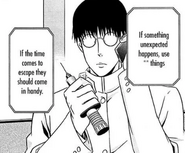