Misako Togane (東金 美沙子 Tougane Misako) is a member of the Sibyl System, a former researcher and Sakuya Togane's mother. If she were still human, she would be in her 70's, but when she integrated with Sibyl, she stopped aging and appears to be in her 60's, albeit with dyed hair to appear younger.

Togane in human form is a female of average height and a slender build. She has dark brown eyes and mid-length dark brown wavy hair that covers half of her face. She has a pale complexion and wears earrings. She is typically seen wearing a white lab coat under which is seen a pink cardigan, darker pink blouse and red skirt.

Not much is known about her personality though it appears she is somewhat vain about her appearance, obsessive about her work and insensitive to the feelings of others.

As Sakuya's mother, Misako takes great care of him when he is a child, praising him often for his behavior. When Sakuya hears of her plans to be integrated into the Sibyl System, he injures Misako with a pair of scissors she often used to cut his hair. Despite this, Misako has her brain excised and body discarded, much to Sakuya's horror. As Joshu Kasei, Misako's feelings toward Sakuya change, evidenced by her reaction when he says he will darken Akane Tsunemori so she can shine brightly. 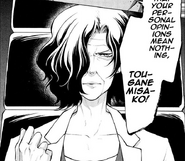