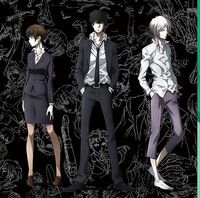 Psycho-Pass Original Soundtrack is a two disc album which holds the entire soundtrack of Psycho-Pass. The limited edition contains an extra disc with credit-less opening and endings of the anime. Additionally, the original soundtrack has several goodies included such as a key holder, four cards, and a booklet with storyboard for the final episode. The tracks were composed by Yugo Kanno, EGOIST, Nothing's Carved in Stone, and Ling Tosite Sigure. It was released on May 29, 2013.