Rikako Oryo is student at Oso Academy. Under the influence of Shogo Makishima, she creates cruel monuments to her father's art using the bodies of her victims.

Oryo is a tall, graceful adolescent girl with long black hair, straight bangs and lavender-irised eyes. She is almost always seen wearing her school uniform. She usually wears a calm, collected expression, but does show fear at the time of her death.

She has the typical charisma displayed by idols of all-girl academies, but her popularity is one-sided and she lacks genuine friendships. She shares the same serenity and aloofness as Makishima, though she is less mature in comparison. Beneath her veneer of grace, however, Oryo is a sinister girl who especially likes themes of cruelty. "Titus Andronicus" by Shakespeare is a favorite of hers because of its depictions of cruelty and she enjoys discussing it at length.

As a painter, her favorite subject is the brutalized female body, sometimes of her victims, with missing or rearranged limbs. She is a psychopath whose artwork mimics her real life crimes. She reveres her late father's artwork and her resolve to commit crimes is based on the vengeance she wishes to exact on the Sibyl System for what she perceives as having been done to him.

Makishima is her mentor at school and her partner in crime until he betrays her after becoming disillusioned with her.

Oryo reveres her father and despises the society that she believes caused him to mentally and emotionally shut down. She wants to honor her father and fulfill his lifelong mission of alerting the masses to societal dangers by creating gruesome works of art from the bodies of her victims. In reality, Oryo the elder is an upright man who only seeks to alert the masses through his art. 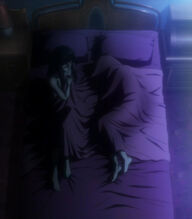 Kogami's Dominator reading on Oryo (in 0108 And Then, Silence)

Oryo realizing that Makishima has betrayed her) (in 0108 And Then, Silence) 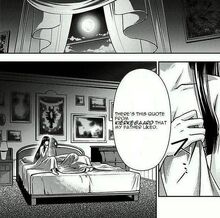 Retrieved from "https://psychopass.fandom.com/wiki/Rikako_Oryo?oldid=22408"
Community content is available under CC-BY-SA unless otherwise noted.