Rina Takizaki is a singer with the unauthorized band, Prophecy. She later joins the protest against the Sibyl System.

Takizaki is a female of average height and slender build who appears to be in her 20's. She has amber-colored eyes, irregularly cut blue hair and red lipstick at all times. She is typically seen in her stage outfit.

Takizaki has a rebellious personality. She loves her music and hates how Sibyl restricts creative freedom.

Despite being an unauthorized musician and rebel, Kunizuka enjoys a brief intimate relationship with her. They care for each other, but this doesn't stop Takizaki from pursuing her politics, nor Kunizuka from trying to stop her. After Kunizuka becomes an Enforcer, Takizaki sends their sex video to the CID where it is seized by Analyst Shion Karanomori. This eventually leads to Karanomori and Kunizuka becoming a couple.[2] 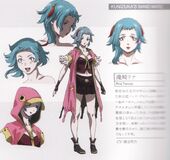