Ryogo Kozuki is an Enforcer in Division 02 of the Public Safety Bureau who is later killed by Inspector Risa Aoyanagi when he attempts to flee in the aftermath of the Helmet Riots.

Kozuki is a male of average height and build who appears to be in his 20's. He has blue eyes and dark blue hair. He is typically seen wearing a black suit, white dress shirt and black tie.

Around 2102, Kozuki begins work as an Enforcer of Division 01 under Nobuchika Ginoza but, at some point, is transferred to Division 02.

He shares a close relationship with Aoyanagi, having "effortlessly and painfully dated with the Inspector."[1] Despite this, Kozuki still tries to flee and is killed by her under the direct orders of the Sibyl System.

Kozuki and Sasayama often play cards together and seem to be friends.[2] 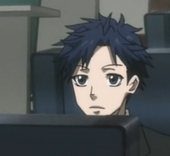 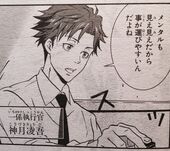