Please be aware that this page contains spoilers. Turn back if you do not want to be spoiled.

Shinya Kogami is a Tactical Advisor within the Suppressing Action Department of the Foreign Affairs Operations Department. Prior to this he roamed southeast Asia serving as a mercenary in foreign countries, like Shambala Float, helping oppressed populations gain autonomy. He originally worked for the Public Safety Bureau as both an Inspector and an Enforcer before his illegal actions against Shogo Makishima forced him into exile.

He is the main protagonist in the first season of Psycho Pass and returns in Psycho Pass 3 as a supporting character.

Kogami has gray eyes, short tousled black hair and pale skin with a tall and muscular build. He usually wears a black suit and tie, as an Enforcer and an Inspector. When in the field, Kogami wears a gray coat over his suit.

In 2116, he wears a khaki green, military-style shirt and pants with a bulletproof vest and brown combat boots. He also carries a traditional gun in a light brown holster.[1] In Psycho-Pass 3, he wears civilian clothing.

Kogami is a skilled detective, his ability to solve cases quickly making him a valuable asset to Division 1, his original assignment. As an Enforcer, he is subordinate to his childhood best friend, Nobuchika Ginoza, who is an Inspector and lead officer. Although the two often seem at odds, they respect one another's judgment regarding police work. Kogami is cool-headed and detached while working a case with sharp instincts and insight into the criminal mind. The way he deals with investigations leaves even the best Enforcers impressed and appalled, as he usually uses risky methods to solve them. However, despite his mostly serious personality, Kogami has a sense of humor and finds it amusing to tease rookie Inspector, Akane Tsunemori, especially about how she once shot him with a Dominator during her first assignment with Division 1.[2]

In the past and while still an Inspector, he develops strong bonds with his Enforcers, one of whom is Mitsuru Sasayama. When Sasayama dies a horrible death while on the job, Kogami's emotions spiral out of control and his Crime Coefficient rises, leading to his demotion to Enforcer rank.[3] He also has some less disciplined tendencies, as seen in his deliberate provocation of Yuji Kanehara.[4]

As time progresses, Kogami begins to suspect the weaknesses of the Sibyl System. When Sibyl refuses to help him get revenge for Sasayama's death, he turns against the MWPSB and goes into hiding to find Shogo Makishima for himself. Eventually, he leaves Japan altogether and becomes a leading force in a conflict in Shambala Float involving Colonel Wong's army and a guerrilla group.

Kogami is born in Kanagawa to Tomoyo Kogami and her unnamed husband. In high school he meets Ginoza and they become close friends after Kogami saves Ginoza from bullies. While there, Kogami majors in social science and takes up kickboxing and wrestling as hobbies, rarities since students only study these arts as a means of stress reduction. When Ginoza tells Kogami his future plans of becoming an Inspector, Kogami decides to do the same, graduating at the top of his class and scoring 721 points on the entry exam. He later follows Ginoza in becoming an Inspector and entering Division 3.

Three years before Tsunemori enters the Public Safety Bureau, Kogami is an Inspector transferred to Division 1 and given the task of watching over his own Enforcers, one of which is Mitsuru Sasayama. Though warned to stay detached, Kogami and Sasayama become friends. They are given a case they nickname "The Specimen Case" because the victims' bodies are dismembered, then encased in synthetic material and displayed in public, much like an insect specimen in amber. Sasayama is on the verge of finding the murderer when he is brutally dismembered and displayed in the same manner as the other victims.

Kogami is the first one to find Sasayama's dismembered and deformed body. The horror causes a sharp rise in Kogami's Crime Coefficient and, refusing to take treatment, he continues to work on the case and is eventually demoted to Enforcer.[5][6]

Kogami and Tsunemori are colleagues in Division 1 - she as a rookie Inspector and he as an Enforcer under her supervision. Their work dynamic reminds Kogami that justice comes before duty and helps him rediscover what being a detective is truly about. He reconsiders his opinions and decides that her way of living is the correct one and thereafter holds great respect towards her. He once says of her, "She's a female who deeply loves law and order, and is also deeply loved by it."[7] While working, Tsunemori gives him the latitude to work in his own way as she learns from his experience. Tomomi Masaoka states that they have a connection destined by fate.[8] As friends, they mutually comfort and cheer one another. Before leaving Japan, Kogami leaves her a letter apologizing for breaking his promise and that he won't ask her forgiveness but, should they meet again, she should judge him as necessary. He also expresses his appreciation for the chance to work with her. In Psycho-Pass 3, they are shown meeting while Tsunemori is imprisoned.

Ginoza and Kogami have known one another since high school, where they become best friends after Kogami defends Ginoza from bullying taunts about Masaoka's latent criminal status. Despite possessing different demeanors, they are very close. Even after Kogami is demoted to the rank of Enforcer, Ginoza holds Kogami in high regard as seen when he hesitates to fire his Dominator despite a direct order from Sibyl to kill the fleeing Enforcer.[9]  It is only after Kogami becomes a mercenary rebel on Shambala Float that Ginoza sees how different his old friend has become.  Even so, he administers personal justice with a one-two punch but allows Kogami to escape with a stern warning to stay away from Tsunemori.

He is Kogami's colleague and friend until his murder in the Specimen Case, the very case which causes Kogami's Crime Coefficient to rise. After being demoted, Kogami becomes obsessed with finding Sasayama's killer, who is revealed to be Shogo Makishima.

Masaoka and Kogami have a positive relationship due to Kogami's friendship with Ginoza. They are also professional colleagues whose style of detective work is different, but equally effective. Masaoka has a safe house and it is there where Kogami hides out following his escape from the MWPSB, prior to leaving Japan. 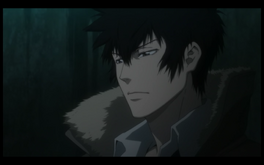 Kogami looking at the victim (Chika Shimazu), in 0101 Crime Coefficient. 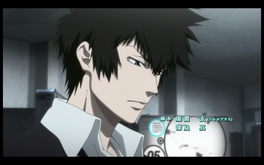 Kogami at work in 0102 Those Capable. 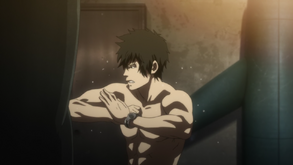 Kogami in his nightmare about Sasayama's death (in 0106 Return of the Lunatic Prince. 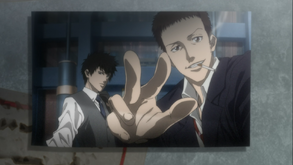 A photo Kogami keeps in his room (in 0106 Return of the Lunatic Prince). 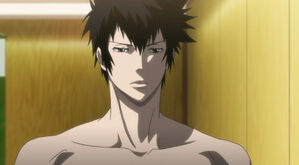 Kogami talking to Akane after his training combat with a robot instructor (in 0107 The Language of the Chinese Orchid). 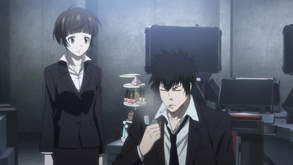 Kogami and Tsunemori working together (in 0108 And Then, Silence).

Kogami about to fire his Dominator upon Senguji (in 0111 Saint's Supper). 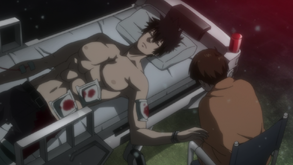 Kogami telling Tsunemori not to blame herself for Funehara's death (in 0111 Saint's Supper).

Kogami thinking about the murder of Hiroko Fuji (in 0114 Sweet Poison).

Kogami facing off with Makishima (in 0122 Perfect World).
Add a photo to this gallery

Retrieved from "https://psychopass.fandom.com/wiki/Shinya_Kogami?oldid=23378"
Community content is available under CC-BY-SA unless otherwise noted.