Shoko Sugawara is a former classmate of Akane Tsunemori and the creator of the avatar known as Spooky Boogie.

Sugawara is a female of average height and a curvy build in her 20's. She has red-irised eyes and red hair that she binds in two ponytails. She is typically seen wearing a pink and white dress with a large neck bow and a darker pink head bow.

As Spooky Boogie, Sugawara is popular and loved. She is rather playful and doesn't mind taking risks, such as helping Tsunemori with a case involving Talisman, which leads to her untimely death.

Sugawara and Tsunemori are former classmates. Though not particularly close, Sugawara is aware of Tsunemori's progress and seems to enjoy helping her. 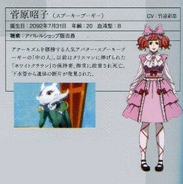