Takumi Yonehara is the Director and Chief Financial Officer of the Hyper Transport Company.

Yonehara is a male of average height and build in his 20's. He has brown eyes and thick, wavy brown hair parted to the right. He is typically seen in a gray suit, white dress shirt and red tie. He sometimes wears a green duffel coat. He is also seen in a bathrobe while staying at a psychological care facility.

Takumi is a timid individual. He is trusting, which often makes him susceptible to the persuasion of others. He is also easily stressed.

He is a suspect in the crash of the transport drone which Arata Shindo and Kei Mikhail Ignatov investigate as their first case for the Criminal Investigation Department of the Public Safety Bureau. While cleared for the murder of Asahi "Rick" Fellows, he meets with less than favorable consequences at the hands of Tetsuya Sasagawa's associates.

Yonehara and Sasagawa have been friends for a long time. They attend the same schools and protect one another until the transport drone accident reveals their financial mismanagement of Hyper Transport. Then Sasagawa, indifferent to Yonehara crying, turns away from his friend and orders him to go to Numakura's group, which kill him. 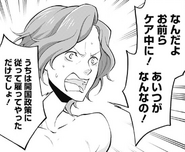