Start a Wiki
Dominator Portable Psychological Diagnosis and Suppression System (Japanese: 携帯型心理診断鎮圧執行システム Romaji: Keitai-gata shinri shindan chin'atsu shikkō shisutemu)、ドミネーター or the 45MW.TRG Dominator is the iconic firearm carried by enlisted Inspection and Enforcement officers. The gun is able to determine the identity of its holder, and requires authentication and wireless connection to the Sibyl System in order to operate. Each individual gun can only be heard by the user currently registered to it.

When the Dominator is aimed at a target, it continuously reads and sends psychological data ‒ Psycho-Pass ‒ about the person on which it is focused to the Sibyl System for a calculation of their Crime Coefficient. When this value exceeds a certain level ‒ indicating that the target is mentally unstable and more likely to commit a violent crime, the gun will be able to fire. If the level does not exceed fixed levels, the muzzle will not open and a safety device will be activated to prevent the user from pulling the gun's trigger. The gun is unable to work when it is not linked wirelessly to the Sibyl System in most circumstances.

Before the gun fires, the muzzle opens up to reveal a complicated mechanism inside, part of which is used to read the suspect's criminality. When the gun does fire, it lets out a bullet the color of sky blue. It is voiced by Noriko Hidaka (Stephanie Young in English). The gun has four modes: Non-Lethal Paralyzer, Lethal Eliminator, Destroy Decomposer and its explosive variant.

The Dominator's standard mode fires energy bursts that paralyze the target - the gun does not need to transform for this mode. It is used to knock suspects unconscious in order to safely bring them into custody. The effect may be reduced or negated if the target is under the influence of strong stimulants.[1][2]

The trigger of the gun is locked by default until the onboard-scanner identifies a person in the gun's sights as having a Crime Coefficient exceeding 100 points, and with the gun's grip in the hand of a registered and authorized user. This is to guarantee that there are no innocent victims and to prevent abuse.

The anti-personal lethal mode of the Dominator. When it changes to this state, the lower portion of the gun undergoes a rather elaborate transformation which includes swiveling, sliding and flipping around most parts while the gun tells its user to what mode it changes. It takes somewhere between two and four seconds.

In this mode the weapon will shoot a huge burst of energy which, upon contact with the target, affects all organic and inorganic matter. Following impact on a human target, everything behind the impact is annihilated. The process takes about two seconds and is quite visually violent as it causes mass swelling where the energy hit. The swelling then spreads to cover the entire body part before exploding. What remains is a few fragments of the corpse, an eighteen-inch or more hole in it and a spray of blood. The gun is also highly capable of dismemberment. Being shot in a limb while the gun is in this mode often leaves the target alive, albeit severely injured with said limb completely destroyed.

Use of the Lethal Eliminator mode is restricted to individuals whose Crime Coefficient exceeds 300 points. Once the Dominator has transformed, it will only revert to its non-lethal mode when unhanded, a few seconds after the most recent threat disappears - one way or the other - from the sensor's field of view, or when the Sibyl System decides the wielder is unauthorized, insufficiently qualified, or too cloudy to use the weapon ‒ though this typically is a person-specific lockout, until permission is granted from HQ.[3]

The Dominator's Anti-Material mode. It is primarily used against hardened targets, like those with armor or large vehicles or drones. The transformation of the weapon is even more extensive, and appears more neon than black. This setting provides the user with a literal hand-cannon blast of three to six feet in diameter, intended to deal with armored targets like the ever-present drones, and possibly to create entry points into buildings.[4][5] The Destroy Decomposer also works splendidly on organic material, leaving not half a trace of it behind. Each Dominator can fire only a maximum of three Decomposer shots.[6]

In the film, the Destroy Decomposer is shown to be capable of variable output. A seemingly high output blast is shown completely vaporizing half a car. Use of the Destroy Decomposer can be authorized against human targets if the subject escalates dangerously to higher levels of violence, such as using explosives. It's possible that this condition is incorporated in order to safely deal with cases of terrorism like suicide bombers, as the Destroy Decomposer would completely eliminate both the bomber and their weapons with little collateral damage.

Part of the MWPSB's new armament, the Assault Dominator is an upgraded version of the regular Dominator. It is a large, intricate rifle that features a scope which allows for multiple targets and increased range, as well as a bipod which allows for a steady plane when the user is ready to fire. Unlike the normal Dominator, the glow of the mechanism within the weapon is red, rather than blue. However, when it switches to Lethal Eliminator, the color changes to blue. Additionally, it has the ability to fire through walls, ideal for when the use of the normal Dominator is hindered.[7]

It functions exactly like the normal Dominator's Non-Lethal Paralyzer, but with its increased range it is more effective in dealing with targets that are far away.

When a target whose Crime Coefficient is over 300 is under the Assault Dominator's scope, its enforcement mode automatically changes to Lethal Eliminator. 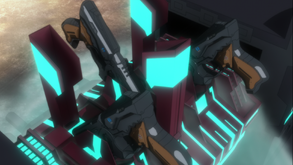 Dominators in their carrier drone (in 0101 episode)

The gun goes back to normal (still in 0101 episode) 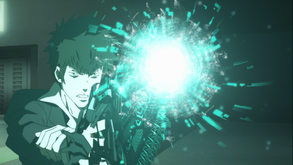 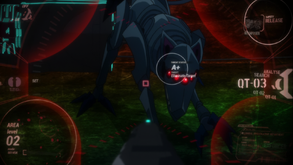 While in Destroy Decomposer mode, the Dominator's HUD turns red and the target receives a grade of A+ (in 0111 episode) 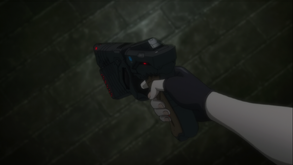 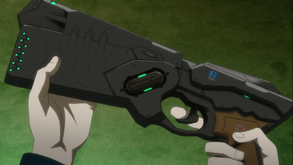 A Dominator that is locked in Non-Lethal Paralyzer, with its safety off (in 0121 episode) 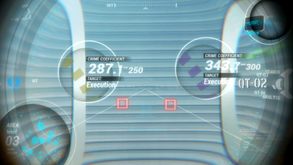 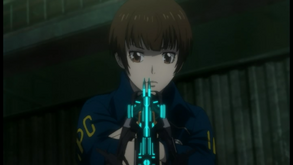 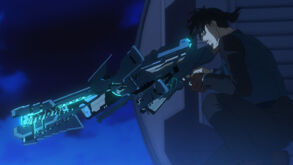 The Assault Dominator in Gekijo-ban Psycho-Pass

Retrieved from "https://psychopass.fandom.com/wiki/The_Dominator?oldid=17630"
Community content is available under CC-BY-SA unless otherwise noted.