Hanchikova is a female of average height and build. She has blue eyes and short blonde hair with three longer pieces covering her face. She is typically seen in casual clothing consisting of blue pants, dark blue tee-shirt and a blue sweatshirt. She is also seen in camouflage clothing and face paint. The right side of Hanchikova's chest is cybernetic, as is part of her right arm.

x Yulya has no speaking lines in her appearances.
Yulya has the largest bust among the female characters in the franchise.
Yulya is a highly skilled knife fighter and markswoman. Yulya is the most dangerous female antagonist, as she fought evenly with Kogame in hand to hand combat and was a professional mercenary. 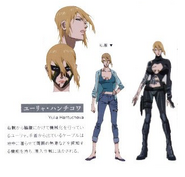